No, not the Colombian border, the Israeli border. And no, not in the airport when I passed through customs and immigration. But returning from Jordan after a 2 day bus trip to see Mount Nebo, Petra and the Dead Sea. What was I doing in Israel? you ask. I was blessed to be able to visit the Holy Land with other members of my church family from Midlothian. I left Colombia on March 3 and did a short 4 day “layover” in Spain before arriving. I was to meet the group in Israel and participate in the 8-day guided tour. It has been a dream of mine for some time, to be able to tour Israel with Pastor Dave. Dave Wyrtzen is the founding pastor, and pastor emeritus of Midlothian Bible Church. He has a wealth of biblical knowledge stored up in his head like no one I have ever seen before.

“Sir, step out of line and come with me.” Came a voice over my left shoulder. Not the words you want to hear while waiting for the passport control officer to stamp your passport and grant admission into their country. Up till that moment I was feeling a little amused by the multiple glances at my tattoo on my right inner forearm. A tattoo of an Arabic letter “N” with the word Nasrani (Christian) written in Arabic underneath. The multiple glances turned into the passport control officer using her hand to summon a coworker. The interest in my tattoo seemed to be growing. Now the glances have become a conversation and my previous amusement has dampened slightly. The two officials spoke and conferred for what was beginning to feel like eons. Until they decided they needed the assistance of a supervisor, the man who belonged to the voice which came over my left shoulder.

I had wondered if my tatoo would cause any problems while in Israel, even to the point where, prior to the trip, I asked Mary, Pastor Dave’s wife, about it. But I never thought the trouble would come from the Israelis. I thought I might get some unwanted attention from some of the Muslims there because of the ties it has to ISIS. Ok, now may be a good time to explain my tattoo.

In 2014 ISIS moved in and captured Mosul, one of the largest cities in Iraq. By mid-July all Christians in Mosul were told to leave, convert to Islam, pay an exorbitant tax or be killed. Thousands fled, some stayed and paid with their lives. ISIS would identify Christians by tagging their buildings and property with the Arabic letter “N” pronounced “noon”, the N representing Nasrani or Christian. A man named Jeremy Courtney living in Iraq, feeling compassion and concern for his fellow Christians, posted a tweet of himself with a red “noon” on his hand with the hashtag #WeAreN. You can see the story and watch the video on CBS News.com

This became a rallying cry for Christians everywhere.The Voice of the Martyrs also put out a book containing 50 stories of individuals persecuted by ISIS.

You can read more about it on National Review.com as well. 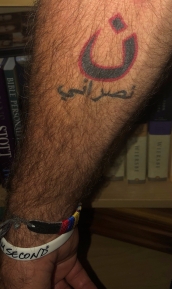 I was moved by this rallying cry, as were many others. I had thought about getting a tattoo with that symbol. I also saw it as a unique way of starting a conversation and sharing the gospel with someone, but I put it off for some time. Until my brother caught wind of it as well. He called me one day and said he had a great idea for a tatt! When he described it to me I said, “I can’t believe this, I have been thinking that same thing for over a year but just havent moved on it yet”. Since I was about to leave to go back to Colombia soon, he suggested we go and get matching tattoos. I worked on a design for a few hours one night and came up with the idea of the N with the word Nasrani under it. The rest, as they say, is history.

“So Mr. Bates, what is your purpose here in Israel?” was the question I was asked by the man who introduced himself as, “the Head of Security at this checkpoint.” Before I could answer he said, “Follow me.” As he lead me into a small room. He continued, “I just want to ask you a few questions, if you answer truthfully, everything will be fine.” Believe me, at no point had I any intention of lying. As I began telling him that I was with my church group enjoying a tour of the Holy Land, he reminded me that my passport showed I came into Israel from Colombia via Spain. Oops. I quickly explained that I had been doing missionary work in Colombia and wanted to meet my church in Israel to join them for this trip. He wanted to know the name of the person heading up our tour. I told him. He asked how many were with the group, once again I told him. Then came the million dollar question, “Tell me about your tattoo. What does it mean?” I gladly gave him the long version, explaining all that I knew about the history behind the symbol, what the Arabic word was and my reason for wanting the tattoo. I went into full detail. I guess I satisfied what ever his concern was with my lengthy story. After probably only fifteen minutes, might as well have been a day and a half as far as I was concerned, he thanked me for my cooperation and said I could go. I thanked him for the thorough job he and his comrades were doing there at the border crossing and wasted no time gathering my things to meet the rest of my team waiting for me outside.

“What was all that about?” was the standard question asked of me by every one of my concerned church family. “I’m not sure, they never really said, but they were really interested in my tattoo for some reason. The only thing I can think of is that it has ties to ISIS, so it must have raised a flag,” I said. A bit confused and a very thankful, I climbed on the bus to resume our trip through Israel.  I thought that was the end of it. Until lunch.

Now on the road to the Mount of Olives we stopped for lunch at a quaint restaurant along the way. As we seated ourselves, Dov, our Israeli tour guide, sat at my table. For the first time since the trip started, five days thus far, Dov caught a glimpse of my tattoo. “What is that you have on your arm?” he asked in a mildly alarmed voice. I began explaining the meaning to him but he interrupted me when I got to the part of what the Arabic word said. I said, “Nasrani.” He said, “No! It says Nasrallah!” I said, “No, actually it says Nasrani, I’m sure of it. I researched it and made sure before I got the tattoo.” “I see Nasrallah.” Is how he responded to me. “What is Nasrallah?” I asked. Dov quickly came back with, “Nasrallah is not a what, it’s a who. He is the Secretary General of Hezbollah, (the extremist Shiite Muslim group in Lebanon). He is our archenemy number one! He desires to see all Israelis dead, and we’re not too fond of him either!” OH SNAP! All of the troubles of the morning at the border came flooding back. I was mortified. “That explains it!” I shouted to Dov. “Explains what?” he questioned. Dov was not with us going through the border crossing. Being Israeli, he was not allowed to travel with us into Jordan. I spent a good portion of our lunch explaining the whole ordeal to Dov over Falafels and sodas and trying to convince him that what was on my arm was really the word I said it was.

As soon as we reached the hotel I was eager to start my research. Who exactly is this “Nasrallah” person and how close in appearance were these two words after all. I grabbed my iPhone and sat down on the bed. Opening up Google I typed N-a-s-r-a-l-l-a-h and What I found shocked me. Over the next half hour I received an on the spot education in Middle Eastern politics. Hassan Nasrallah is exactly who Dov said he was. And the two words were incredibly close in appearance.

Keeping in mind that Arabic reads right to left, the first four letters are identical! The last couple are similar enough that I can see how someone who is already sensitive to that name could mistake it, seeing it on my arm from a short distance away.

I don’t know if Dov fully believed me that the tattoo actually says “Nasrani”, but needless to say I felt horrible that the officers at the border thought I had a terrorist’s name tattooed on my arm. No wonder there was such a concern. Here is a man, coming from Colombia through Spain, “claiming” to be with a church group from Midlothian, Texas and sporting the name of a known and hated terrorist on his arm! (Or so they thought). And what about all the other Israelis who might have seen it while I was traveling about their country. I surely did not want to offend any one of them. Even more so, I didn’t want to take a bullet for a misread tattoo either. I decided wearing long sleeves the rest of the time in the Middle East was probably a good idea, or at least cleverly disguising the Arabic with a black Sharpie marker so it was not legible.

Well, if only one good thing came out of this whole ordeal, at least I got to share my faith via my tattoo with the Head of Israeli Security at the Jordan border.

To God be the glory!

If you like what you read, let me know by clicking “like” or leave me a comment below.
And if you do not know Jesus Christ as your Savior, don’t waste anymore time. He wants to have a personal relationship with you. All you have to do is ask!

Thanks for stopping by! View all posts by Randy Bates

6 thoughts on ““Trouble at the Border!””